Once one leaves the Western gate of Europe, there is an inherent search to find common bonds of communication with other cultures. A shared language, spoken or written, is a steady and well-walked bridge between nations; an interest in food, dendrology or astronomy will tie people together from different cultures. Whilst travelling up to Bahla, an ancient pottery town in the A’Dakhiliyah region of Oman (200 kilometres north of Muscat), I was keen to speak to the local potters about their production of clay body from their clay pits, their output and their firing techniques.

Outside the tourist routes, Oman remains a traditional society and initially it was difficult to speak directly to the potter without an intermediary. However, once the subject of temperatures and firing was raised, we potters spoke directly, in Arabic, as our translator was unable to keep up as we interrogated each other. The ‘walk in’ kilns in Bahla can reach temperatures over 1100ºC, using wood gathered from the desert and, in this particular case, a modern addition of massive gas canister at the back, with an Exocet missile of flame throwing to boost the heat. It looked impressive, but rather dangerous. I fire mostly at 1240ºC, but within the safe confines of my electric kiln, so I felt that we were not exactly on a level playing field. However, the Arabic number of 1240 produced a smile on my fellow potter’s face. A bridge was formed between our cultures by the mutual obsession with firing temperatures.

The heat in the kiln and the weather outside cause variations in the texture of the glaze in addition to the colour: particularly when using reduction firing techniques. I confess to being at the foothills of reduction firing, but already I am beginning to notice close colour bonds between nature and the glazes. None more so than the natural shell colours of our rare breed chicken eggs. I have spent the last few years hatching and breeding our own flock; sometimes buying in fertilised eggs from specialist breeders, to keep the gene pool wide and also to cross over the colours with varying dominant genes. 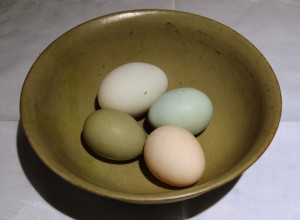 We produced some excellent Marans from South of England Show stock and they produce an incredibly dark brown egg; the colour of early Georgian mahogany. Once this is crossed with a hen from strong Araucana stock (which carries the blue gene), one is likely to find what is known as an ‘Easter Egg’ layer, in your next batch of hens. The colour is often referred to as ‘olive’ and is certainly despised by the purists in the chicken world. However the ceramic enthusiast will recognise this hue from early Chinese stoneware and porcelain. Some excellent examples are to be found in The Sir Percival David Collection at The British Museum. There is a fine Yue ware dish decorated with a pair of phoenix and the character yong (eternal) engraved on the base. The dish originated from the Yue kilns, Shanglihu, northern Zhejiang province during the Tang Dynasty; probably around the late 9th or early 10th century. The celadon glaze is the perfect match to the ‘olive egg’. 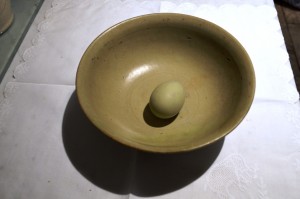 Moving into the Northern Song dynasty, about AD 1086 – 1125 there is a fabulous bottle with a copper rim mount (Ru ware), within the same collection. It hales from Qingliangsi, Baofeng County, Henan province. The translucent blue is caused by iron oxide with low levels of titanium dioxide. The titanium provides a green tone to the blue. Although coal firing was prevalent at the time in this region, it seems that the Ru ware potters used wood-fired kilns. The alchemy of temperature, technique and materials has given birth to a colour that resembles an Araucana chicken’s egg. Can this be a coincidence or were the Chinese potters inspired by their own livestock and the rhythms of their domestic lives? There is a pleasure that is difficult to surpass, when one opens up the chickens at dawn. Sometimes a warm egg will be nestled in the hay, in the early morning light and the colour can be arresting. There are a pair of sisters that consistently lay eggs the colour of a qingbai glaze. When one sees these beauties, it is difficult to believe that the glaze colours and the egg shells are not directly connected.

I have always been inspired to produce shades and tones in the glazes that are reminiscent of my prize eggs. Imagine my delight when I found the Sir Percival David Collection (then housed at SOAS, now at the British Museum – http://www.britishmuseum.org/visiting/galleries/asia/room_95_chinese_ceramics.aspx ) for the first time. Some stunning pieces shared the characteristics in colour and texture of my hens’ eggs.

I have provided some photographs of the eggs. My suggestion is to visit this breath-taking collection at The British Museum. If time does not allow, one could view some of the plates in one of the BM’s collection of publications, “Chinese Ceramics, Highlights of the Sir Percival David Collection” by Regina Krahl and Jessica Harrison-Hall, from the comfort of one’s own armchair as winter draws in. Another excellent publication is The Percival Foundation of Chinese Art: A Guide to the Collection by Stacey Pierson.