Inspiration must be an inherently human trait and one that joins us across cultural, social and economic divides. Listening to a friend being interviewed on the radio, I was fascinated to hear about the “book that inspired him” as a young man. I was compelled to read it, as if some sort of cultural provenance or secret source of his energy would be revealed (the book being The Power of Thinking Big).
It is a lifetime’s task to reveal exactly what influenced and inspired the potters from the past and for which complex reasons their work was displayed. However, whilst attending the third, annual Sir Percival David lecture at Bonhams last year, entitled “Tales of a Tea Jar: Chinese Ceramics and Tea in Japan” by Louise Cort*, many reasons were revealed.
This enthralling lecture was based around the story of a Chinese, ceramic storage jar and its rise to fame. Tea drinking became widely popular during the 14th century for health reasons. The tea would be stored, the leaves broken and then whipped. Tea bowls became collectable and 14th century tea drinking was a group activity. Occasionally, sake and food would be consumed and poetry read. The tea would be served in an anonymous way; scoops of tea distributed, water poured in and then whisked. Many bowls would be used for this purpose and a display room allowed the guests to see the tea making utensils.
The situation changed in the late 15th century when the merchant class of Japan joined in the social rituals. Chinese ceramics were being used by port administrators as the warrior class let go of their Chinese ceramics. The particular tea storage jar, that was the centre piece of the lecture, was even given its own name” Chigusa”. It was deemed worthy of its own luxurious silk accessories and played a central role in the tea ceremony. The jar was owned by merchants living in Socai. An imaginary world was constructed in Japan, centred around small, tea drinking houses in the garden. The new form of tea drinking had less formality and was more frequent; a simple break from the commercial activities of the day. There would be perhaps 3 or 4 guests present and the host would make the tea individually.
A brief word must be said about the actual tea plant. The new tea leaves were picked in Japan and jars would be sent to the plantation owners and documents would record the tea packed within the jar. The owner would sign authentication and press a seal so the contents would not be contaminated. The jars of tea would return in late spring and by November the tea would have mellowed. Intimate friends would attend the formal opening of the jar, the seal would be cut and the powder poured out. “Thick Tea” would be the tea that was ground. The guests would enjoy a special moment in the cycle of tea. The best utensils would be used whilst the tea room would be the focal point of connoisseurship. Through this process, proud new owners would display not only their tea purchases, but their tea utensils and their knowledge of the tea ceremony.
I am sure that there was a small element of display behaviour, but the all-pervading atmosphere would have been one of conviviality, refreshment not only physically but mentally and sharing of artistic and cultural patterns from other countries. I feel that there was a generosity within the ceremony and a sense of calm, whilst observing and appreciating new crafts from faraway places. Imagine crossing the sea between China and Japan before the advent of the aeroplane or sturdy sea vessels. There must been the faraway breeze of the East China Sea about those teabowls when the Japanese merchants drank from them; a moment’s reverie in the garden tea house.
In conclusion, it has been the records of practical uses, the social ceremonies that sprung up around the ceramics and tea drinking, the appreciation not only of beauty, but of other cultures and their practices, the interest and welcome they received, whilst prompting friends to share these new commodities. All this information has inspired me to share my work which has been developed through the passionate study of The Silk Road and the ceramics that travelled along it. I have even forced myself to throw large “statement pieces” in stoneware and to paint or glaze them in imitation of the mighty porcelain. I only work in porcelain, but I felt I had to get in touch with the potters during the Abbasid period as they sought to find the secret of porcelain. That is a story for another time.

*Louise Allison Cort, Curator of Ceramics at The Freer Sackler, The Smithsonian’s Museum of Asian Art 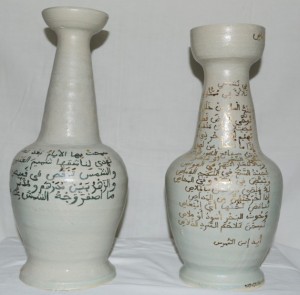 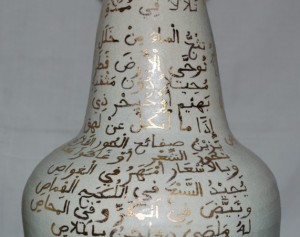