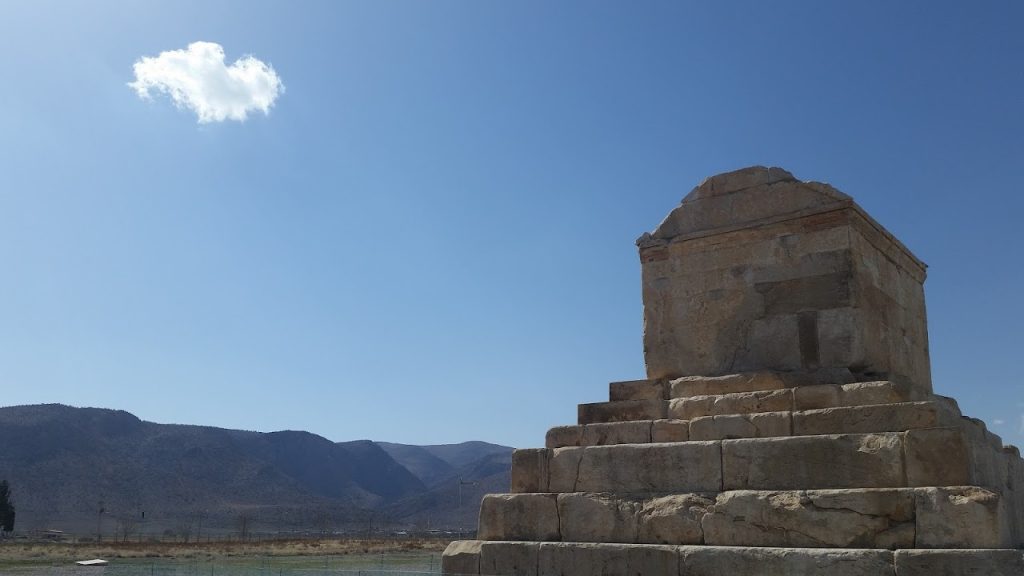 Pottery has long roots in the ancient world and remains a historical marker of all events since history began; especially along the Silk Road where one can still witness the vast exchange of trade and ideas that flowed along it throughout the centuries. It was with this purpose of tracking the route of the Silk Road that we travelled out to Iran and down the ancient highways to the city of Bam. Whilst it remains somewhat inaccessible, it is one of the most important staging posts in the ceramic journey and essential to visit to fully understand the myriad of influences on Persian ceramics. Of particular note was the trade from the stable governance of the T’ang Dynasty (AD618-906) in China and the arrival of porcelain, closed forms and variance in decoration.

The development of lustreware in Persia and the exquisite use of texts, often using the Kufic script known as ‘rose thorn’, is a subject in itself. To see just one piece of ancient lustre painted onto a frit (stone paste) body, in Kashan, transports you back to the 13th Century.

A haven for those fascinated by the dawn of ceramic production has to be the National Museum of Iran in central Tehran. Surrounded by snowy peaks and billows of icy air from the mountains, this is a real jewel. Opened in 1937 and designed by Andre Godard and Maxime Siroux, its design was inspired by the Sassanian vaults (Sassanian Period 224 to 651 AD) and in particular, the Taq Kasra at Ctesiphon (situated 22 miles East of the River Tigris and now in current day Iraq). The brick building and vast archway is reminiscent of this magnificent period of architecture and design.

The Museum retains an uncluttered and simple air where one can appreciate some of the finest examples of clay forms from the Neolithic Age. Clay formation pieces were produced for ceremonial purposes, cooking, carrying water and for eating and drinking. Despite the focus on utility ware, the decorative motifs and shapes had already been developed. Particularly notable are the conical, earthenware vessels and those carrying illustrations of dancing goats. The brush work is so adept that an animated quality is transmitted with such illumination that the goats appear to be moving. There is a rare example in the Ashmolean Museum of a dancing goat on earthenware, should this magnificent museum not yet be on your travel agenda. 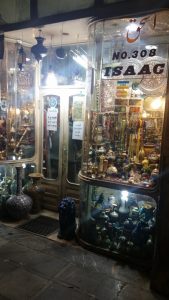 Travel due south for nearly 1000 kilometres from Tehran to Kerman and one can discover some stunning craftsmanship in the caravanserai and ancient bath house. Built by Ganj ali Khan, the governor of Kerman from 1596 to 1621 under Safavid Shah Abbas, this beautiful building in the Isfahani style has weathered the heat and desert winds. Careful use and curatorship has preserved the original, handmade tiles from the 17th Century. Complex, geometric designs are created from cobalt, turquoise, black and white glazing. In contrast to the mass produced mimicry of the 21st Century, these tiles were made and decorated by hand. Each minute variance gives a shimmering depth to the vast walls which is both relaxing and mesmeric. It is an example of the vast difference between the factory-made reproductions of today and the supreme talent and dedication of the Persian potters in the 17th Century.

Moving back in time and yet only 100 miles west, one finds the magnificent ‘Arg-e-Bam’ which dates from the Achaemenid period (6th – 4th Centuries BC) on the ancient trading route of the Silk Road. During the 7th to 11th centuries it was known for its production of silk and cotton garments and it was an important trading station. Earthenware utilityware was produced within Bam for the fortress known as the Bam Citadel. In 2003, a vast earthquake hit the region and the citadel was virtually destroyed. The buildings were comprised of non-baked clay bricks (adobes) and, at the time, was the largest adobe structure in the world.

We were shown the painstaking reconstruction of this UNESCO World Heritage site by the former mayor of Bam, Mr Reza. The construction industry remains the largest user of clay (in its most unrefined form) and the reconstruction of the citadel makes use of local clay and straw This work was carried out in the searing heat and the scale of the work, many years later, is impressive. Not only that, but vast agricultural projects of cross pollination of citrus fruits take place in the region; notable the Bam Lemon which looks like a large, sour lemon but tastes like a sweet tangerine. 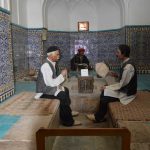 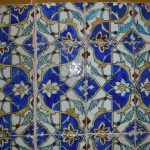 Shiraz is the ceramic lovers’ paradise. The Pars Museum lies within the beautiful Nazar Garden, designed and constructed during the Safavid rule (1501 – 1722). During the Zand Dynasty (1750 – 1794) Karim Khan built the octagonal building which serves as the museum today (created in 1936). Here, there are many handwritten and exquisitely illustrated Qurans, dating from 14th Century and one can see the artistic literacy that translates into the scripts adorning many of the ceramics in the museum. Of particular note are the rich glazes used on the stoneware; fresh, deep turquoises and green overglazes, all handmade from minerals mined within Persia. One naturally wonders where the inspiration came from to produce these rich colours, perhaps from wares seen in the caravanserai where the deep celadons of the Northern, coal-fired kilns of China were making their inaugural visit or maybe from the temples and natural scenery.

Near Shiraz, the ancient city of Bishapur presents itself in two halves as it is now divided by a new road (where road signs are totally irrelevant). On the left-hand side, the spring-fed Sharpur River runs along the encased valley. Small, silver trout swim over a veil of green and turquoise water that matches the glazes in the Pars Museum. Nomadic ladies wash their carpets, undisturbed by the thunderous waves of rocks, carved with six stunning rock reliefs depicting scenes of Roman and Persian soldiers. Carved by master Roman artists, who were apparently ‘free’ men with their leader Valarian, these reliefs were commissioned by Shapur (241 – 272), the Sassanid king.

On the right hand side of the road there is the Anahita water temple of worship; 18 steps below the ground where qanats, or underground water channels, surround the depressed courtyard. This magnificent irrigation system creates the sense of being under a vast volume of water or even under the sea. Bishapur was founded in 266 AD by Shapur and was clearly a production site for early Persian ceramics. Although no evidence of kilns have been found during the excavations, there are thousands of sherds over the whole site and complete vessels have been excavated; examples of incised wares, probably used for storage of oil and water. Despite the emptiness and vast bolts of silken skies, Bishapur seems lived in and alive, perhaps due to the remnants of ceramic vessels accumulated over the centuries. 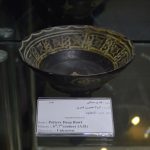 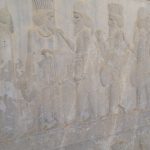 East of Shiraz one discovers the ancient and ceremonial capital of the Achaemenid Empire (550 – 330 BC), Persepolis. The urban sprawl of Shiraz gives way to verdant pastures and the pretty orchards of Fars province. The Gate of All Nations, can be seen rising from the plain, from a distance. On the approach, the remains of the rusting tent posts from the late Shah’s last party in the 1970s lie derelict in a copse of fir trees; apparently snake infested and unsafe. However, this does not deter from the sheer splendour of this ancient city. Discovered by Cyrus the Great and then built by Darius I, this great city lies on the brown plains with the blue sky and sense of eternity.

On a more domestic level, the fresh and detailed stone reliefs depict many scenes from court life and of particular interest were the beautifully depicted ceramic bowls being carried in as ceremonial gifts alongside stallions, bales of cloth, a Bactrian camel and a humped bull amongst other exotic ware – ceramics being highly prized during this period.

Travelling across the dusty plains outside Yazd, there are structures from the 17th Century that could easily be mistaken for kilns. They are, in fact, ice houses and one of the best examples is the Meybod Ice House; made from adobe and mud and constructed during the Qajar Era, it rises out of the earth like an enormous beehive. Inside, however, one travels down a series of steps to where the ice would have been collected in sheets from the mountains and then stored inside the structure. The engineering is impressive and has stood the test of time.

And finally, at the end of our vast circular journey around this extraordinary country we returned to Tehran and The Islamic Art Museum, the home to thousands of exquisitely curated pieces of Persian ceramics. There are some of the finest example of lustreware, black and turquoise glazing, underglaze, Kufic script and vast vessels. Whilst remaining part of the National Museum of Iran, the Islamic art is housed separately. It was recurated in 2014 and yet retains the quality of a bygone era. The museum was virtually empty and silent and the exhibits were arranged in such a way that they could speak for themselves; voices from the past, undimmed by interactive sound and light shows. It was a truly memorable experience.

A journey through Iran is richly rewarding. Those that make the effort will be inspired by the combination of natural beauty and cultural counterflows that has inspired such unique and wonderful ceramics for thousands of years. As Vita Sackville-West said of her time in ‘the merciless space of Persia’: “All old habits of mind have left me, so that it is possible to approach the old ideas with a new eye. The heart is renewed, and winds have blown away the cobwebs.” 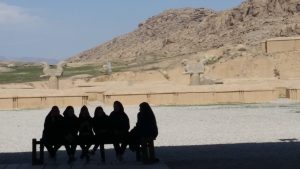 Persian Ceramics from 9th to the 14th Century edited by Giovanni Curatola and thanks to the Thomas J. Watson Library

With many thanks to Jill Norman (www.jillnorman.com), author and publisher, who was the both the instigator of this unforgettable tour and the finest companion.